Right before we moved into the big old farm house, my in-laws sold their cute country salt-box for the retired ease of condo life. We inherited a collection of rakes and shovel, leafblower, lawnmower, hammock. One of my favorite acquisitions was her dad's 70's era gas can - pebbled red plastic with a simple, efficient yellow spout that you pull out of the can and invert to pour, remove to fill, and store int he mouth of the can itself. It has a second little screw-top valve on the opposite side by the handle for letting air in to replace the volume of gas like punching that second hole in the top of a Juicy Juice can. 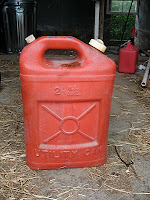 When the power went out for a week in that first terrible January storm, the in-laws got us a shiny new generator and I picked up a second gas can on the snowy drive back back from their condo in the pick-up. Later that cold, dark evening, with gasoline soaking my hands to the cuffs and dripping though the floorboards in the woodshed, I struggled to figure out the unnecessarily complicated spring-loaded spout mechanism until I half-accidentally busted it off the threads and used a funnel instead.
After the great thaw we invested in a weedwacker, which necessitated yet another gas can in which to mix the oil for the little 2-stroke engine. This time I splurged and got a fancier version at the farm supply store instead of the cheap gas station crap, but it too was overly complicated, with springs and gaskets and flow settings and such. But at least it worked, and it actually worked really well once I figured out that the design was meant to catch the lip of whatever you were filling and press down, compressing the spring in the spout and opening the valve inside - all in the name of safety, I guess.

So a month or two later, with Spring in full bloom and threatening daily to overwhelm us, we got us an old tractor to help beat it all back, and I went back to the farm store and got a similar make of gas can, only much bigger and yellow, for diesel. The little tractor, with its grunty 2-cylinder diesel engine, was so efficient that it was nearly a month of mowing and moving dirt piles back and forth before I needed to fill the tank the dealer was kind enough to top for me when I bought it.

I had to bypass both the local Stewarts and the strangely out of place independent gas station run by two Sihk hipster brothers in their 20s and head out to the big truck stop by the interstate, and then right past the familiar islands of pumps, lights, and winshield cleaners for the single solitary pump on the far end of the parking lot, festooned with warnings - "For diesel engines only." Even the pump handle was different, presumably for the larger hands of truckers and farmers and the like.

I strapped the full heavy gas can down int he bed of my pick-up - inadequately; there was much splashing on the bouncy dirt road - and headed home, still quite early on a Sunday. After a bit more mowing and turning the compost pile, the needles on the gas guage creeped farther left and I hopped off the tractor and hauled over the bright yellow can through the thick sward of grass clippings.

The arms of the front loader prevented me from getting too close to the gas tank from the sides of the tractor, so I balanced the can on the hood (if indeed it is a hood on a tractor) and climbed up on the deck, straddling the steering wheel and gearshift. Somewhat awkwardly, I hoisted the up can and positioned the little catch on the lip of the tank's neck, assuming the pressure would compress the spring, release the valve, and gas would flow. Of course I didn't notice the plastic mesh fuel filter sitting on tip of the neck, which promptly bent in half and smushed halfway down into the tank from the weight of the full can resting on it. I inspected it, shrugged, and tried again, this time with a funnel, only the pressure of the full can jammed the already bent and smushed fuel filter the rest of the way down into the gas tank, and the funnel fell right in after it. And, safety be damned, I had once again succeeded in soaking myself in gasoline.

So I did some thinking and called up the hardware store in town. It being Sunday, they only laughed and wished me luck. With the weekend running out and grass growing right before my eyes, I wiped off the yelow diesel gas can and heaved it over to the shed. In it went, springs and sprockets and valves and all, and out rolled the old push mower, which I delightedly filled from the pebbled red plastic can. Screw in spout, screw open valve, fill.

By the next weekend I had purchased a long, flexible mechanic's claw with which to fish around in the gas tank of the tractor for a couple hours in the hot sun until, soaked in gas to the elbows, I victoriously fished out first the mangled fuel filter and then the funnel. Surprisingly, I was able to smush the filter back into a moderately usable shape, and the $2 I spent on the handy-dandy pump siphon meant it would never get mangled again.
Posted by Cotton Hill Creamery at 12:42 PM