Every summer here on the hill, several times a day, I have to stop what I'm doing and just take notice. The color green saturating the landscape, the feeling of cold mountain water on hot skin, the breeze that precedes a rainstorm, the way it stays light out until nine, and of course, the food. So much variety, and everything tastes so good!

Last weekend we visited Sherman Hill Farmstead in Franklin, NY and Dirty Girl Farm in Andes as part of the Catskill Family Creameries Open House, which you can read about at http://www.catskillsfamilycreameries.com/index.html The farmers and cheese makers were really nice, answering all of our million questions; we barely made it home for evening milking! Sherman Hill's aged cheese made an excellent snack while we cleaned and cooked the chanterelles we found on Monday.
Speaking of snacks, I can't walk by the sugar snap peas without eating at least one. I never get tired of them! 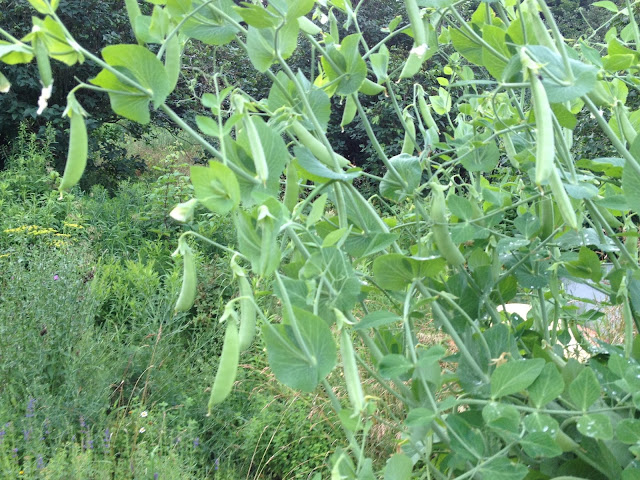 After the birds ate all my sour cherries, I wised up and covered the raspberries with bird netting. So far, so good - I harvested the first full pint on Wednesday. Breakfast has been extra special ever since. 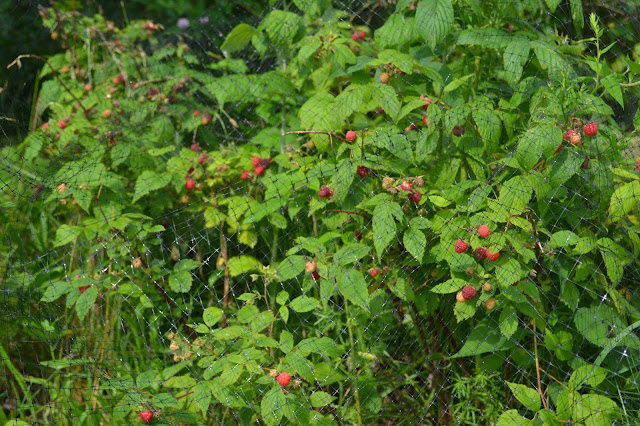 Bird is a very patient harvest dog. He helps sniff out chanterelles and waits so sweetly in the garden... 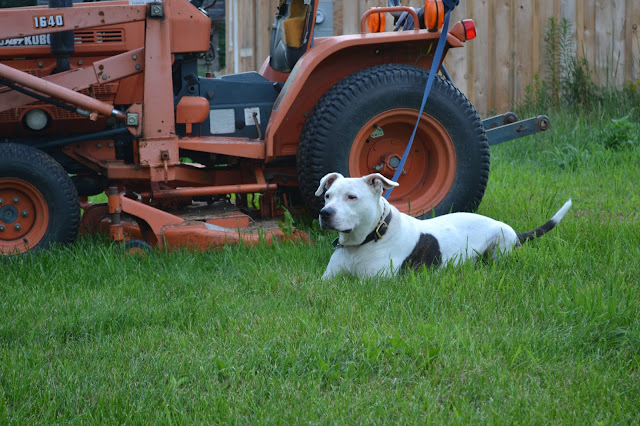 ...while I pick cauliflowers bigger than my head! If you have them too, make this: http://www.myrecipes.com/recipe/mfk-fisher-memorial-cauliflower-casserole-10000000523815/
Or this: http://dinersjournal.blogs.nytimes.com/2011/09/30/the-minimalist-pasta-with-cauliflower/?ref=dining
Or do like Farmer Fin's sister, Little Debbie, and steam the cauliflower until tender, chop into tiny pieces, and toss with tahini, lemon juice, salt and pepper.
A few summers ago, I had sour cherries for the first time. I bought a quart at a farm stand and made one precious jar of jam. This spring, Farmer Fin bought me two little cherry trees for my birthday (and planted them for me too). Unexpectedly, the sour cherry tree bore fruit a couple months later. I anxiously watched it ripen, until one day, it was almost there...and the next, there were only pits left on the stems. Curses! What could I do, but head downstate to pick sour cherries. With the help of some friends (thanks Levy family!), I came home with seven pounds of them. 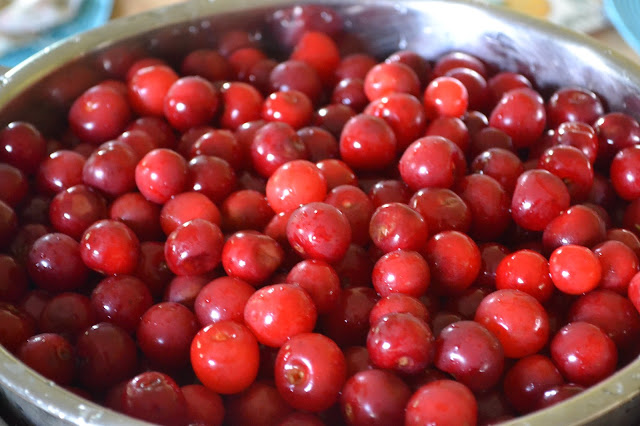 The other day, I put on an old red shirt and got to work. It took forever to remove the stems and pits. I decided to make two batches of preserves. Here's my basic procedure (after the jump):
Sour Cherry Preserves

1. Cook the cherries (after removing stems and pits - poke 'em through with a chopstick if you don't have a fancy cherry pitting gadget) with the juice of a lemon in a non-reactive pot for about twenty minutes on medium-high heat, until they are all mushy. You can mash them up some as they cook if you want. You can add spices and such too: I did one batch with a dried ancho chile pepper, and ground some nutmeg into the other.

2. Turn off the heat and ladle the cherries into a measuring cup. When you know how much cherry pulp you have, pour it back in the pot and add 3/4 that amount of sugar (so if you have four cups of cherries, add 3 cups of sugar). I did half sugar and half honey. Math whiz!

3. Cook until it starts to gel up - 220° if you have a candy thermometer. If you don't, do the freezer test: put a little plate in the freezer, spoon a bit of the preserves onto it, and put it back in the freezer for two minutes. Take it out and nudge the preserves with your finger. It should be somewhat firm, and wrinkle when you push it.

4. If you want, stir in a few drops of almond extract or a couple tablespoons of kirsch or other fruit liqueur. Then you can refrigerate or can your preserves, as you please.

Just make sure you don't cook it too long in step three. It's better to have runny jam than gummy candy in a jar, which is what happened when I started to get tired and less vigilant. I'm pretty angry with myself about this, especially because after hours of work, I ended up with just three full jars for the pantry and two partially full ones for the fridge.
Luckily, there was some sour cherry juice hanging out in the bowl of pits, enough to make a lovely cocktail for the end of a long day:

2 oz. cherry juice
2 oz. whiskey (bourbon was what we had in the house, but I think rye would be good too)
1 oz. simple syrup (or more to taste)
Some seltzer and ice

Combine, garnish with mint (yeah, no garnish in the picture, it was late) and sip away! This recipe is for one drink, but your friends and family will be jealous, and you may want another, so make more.

Posted by Cotton Hill Creamery at 9:40 AM