The Swine Are Fine

Ladies and gentlemen, it's official: this must be a farm, because we now have pigs. 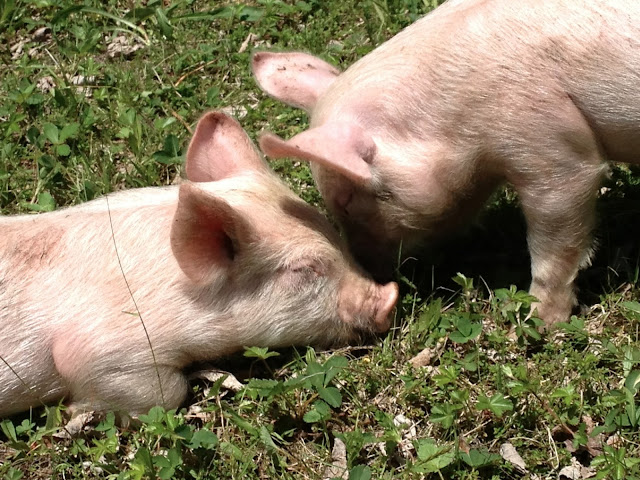 Farmer Fin picked up these little piggies on Memorial Day. They were just eight weeks old. It's always a weird relationship with animals we know will be meat one day. Our job is just to keep them happy and healthy for the duration of their tenancy here. They are fascinating creatures. The first thing the girl pig did at her new home was root up a pretty big snake and bite its head off. Unlike the goats, they like to sleep late, and they never ever pee in their house. Their house is a luxurious A-frame and they have a nice little set-up near the top of the hill, food and water and delicacies like the whey from cheesemaking, and they seem pretty content with it most of the time. 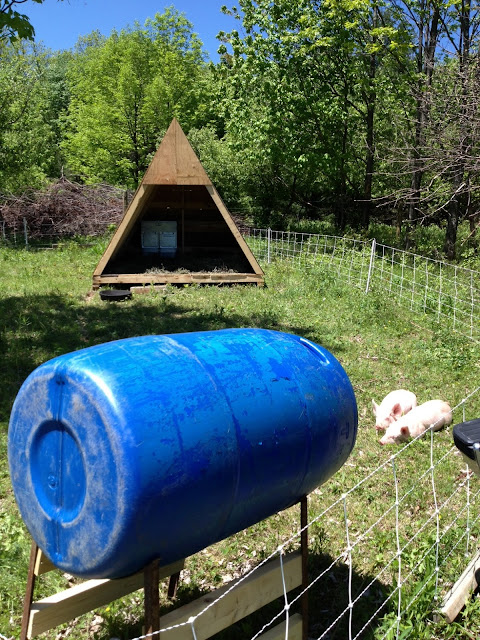 Most of the time. Not always. Seems they're pretty curious about the world in general. Smart too. They figured out before we did that the solar charger for the electric fence was no longer carrying a charge after a few rainy days. By the time we got all the kid goats back in their pasture and the new charger hooked up, those piglets were gone. Slipped right under the bottom strand of the perimeter fence and into the (endlessly fascinating) forest.

Farmer Fin saw them outside the northwestern edge of the fence line. The chase was on. We crept through the forest for about a half mile when, slightly past the verge of giving up and becoming responsible for a new feral pig infestation (or just a tasty treat for coyotes or a fisher), I spotted them, all snuggled up beneath the branches of a fallen tree. I whistled for Farmer Fin, and he slowly approached.

On the count of three, we each lunged for a leg, and fortuitously managed to grab them at the same time. The squealing was unearthly, and also loud as hell. It continued as we, each with 30 pounds of screaming, thrashing piglet grasped tightly in our arms, began the hike back over rough, marshy, unmarked terrain towards where I figured the pigpen was.

Finally we reached the pen and deposited the piggies there. The piglets curled up in their house and went right to sleep, all tuckered out after their adventure. We humans were pretty worn out too.