I Kill What I Eat

This year, for a change of pace, we raised heritage breed chickens, instead of Cornish Crosses, for meat. To be honest, it was my inherent - shall we say - frugality that led to this decision. I'm cheap, and there was an ad on craigslist for 85-cent cockerels, so I did a little research and we decided to give a shot to raising more natural chickens instead of those fat hybrid freaks. 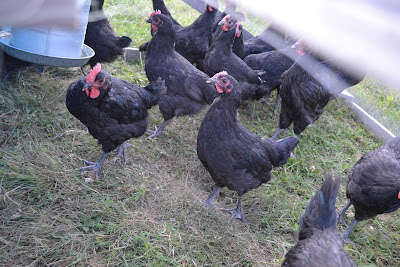 Turned out they were Australorps, and they were hell-in-a-chicken-tractor to raise. Sure, they were less prone to suddenly dropping dead than the Cornish Crosses seem to be, but they were so...birdy. They seemed unhappy to be confined in their pen, despite our moving it to a new pasture every morning. This dissatisfaction was manifested in their attempts to escape by flying away every time we opened the pen, and quite a bit of chicken-on-chicken violence. Plus, you have to raise them for 12 to 16 weeks before they are ready to go. By 12 weeks, we were pretty sick of them.

In previous years, we have dropped off our live birds at a local farm in the morning and picked them up in the afternoon, ready for the freezer. This year, in the spirit of doing things differently, I found a flyer at Agway for a different farm, one that offered a discount if I would help process the birds. Last Saturday, I learned how to process chickens.

I was nervous, because I had never killed anything besides bugs and unlucky animals that wouldn't get out of my car's way. I wasn't sure I could do it, and this is something I've felt kind of guilty about for a few years now, but I was able to rationalize that I don't have to kill stuff if I don't want to, that maybe my part is just to give animals a satisfying, happy life before they become my food. Still, I felt like avoiding this part of the process was kind of irresponsible or something. That being said, this is where the vegetarians and the squeamish should probably stop reading.


The farmers, Mike and Cindy, were really nice. They showed me around, introduced me to their farmhand, Matt, and to Mike's daughter, Jamie, and nine-year-old niece, Lexi, who also wanted to learn, and we got started. First, we put the chickens into the killing cones, like inverted stainless steel traffic cones with a bigger opening at the narrow end for the chickens' heads. Earlier that morning, as we loaded the chickens into the boxes, I had discovered that chickens become really mellow when they are upside-down. Don't know why, but it's true. Hanging in the cones, the birds were pretty still. Mike showed me how to slit their throats on both sides of the trachea with a very sharp knife. The moment before I slit my first throat was pretty serious. I paused to take in the heaviness and then I made the cut. A little twitching, not too much. The chickens bled out pretty quickly into a basin beneath the cones.

When they were really dead for good and all, we dipped them in scalding water and into the plucking machine they went, where rubber finger-protuberance-things pull off the feathers. Then it was on to Evisceration Station, where we removed the heads, feet, and internal organs. Please note that I am the person who made my lab partner do all the cuts when we dissected animals in high school biology, even the earthworms (thanks, Maya!), but it turns out that now I kind of dig this shit. It was kind of fun to see what all the organs look like and where they go and what they're attached to and stuff. Two things should be noted here: one is that chicken testicles are disproportionately huge, and the other is that the nine-year-old kid was a champ at evisceration: little hands and a very tough disposition.

And that was it. An ice water bath and packaging, and that afternoon we had 28 chickens-the-meat in the freezer. They turned out to be very small; only a few made it to three pounds, and most were around two, but they will fit nicely in the slow cooker this winter, and we are a two-person family anyway. For the rest of the weekend, I had this Big Black song in my head, the one that goes:

Now I know I can, if it's a chicken anyway. Mammals are a whole 'nother story, one that may be continued several years in the future. 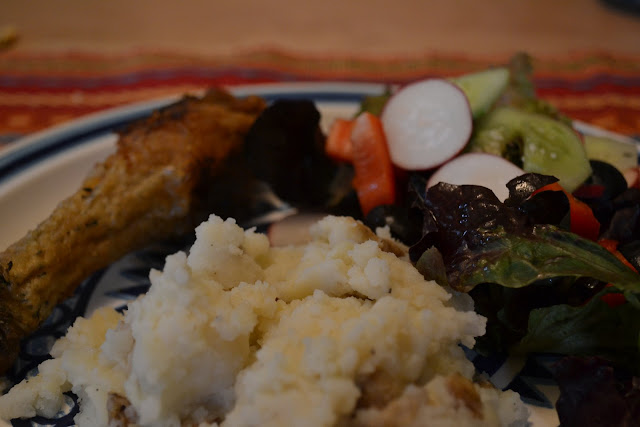 Posted by Cotton Hill Creamery at 9:26 AM