One amazing thing about our house is that it does not seem to be haunted. Although I'm a pretty grounded person, as insensitive to the supernatural realm as I am to most things (thanks again for putting up with me, old friends), I have experienced places where I felt spectral presences. Hearing footsteps when nobody was home, lights turning on and off, feeling like someone is watching you - all that mildly creepy type of stuff.

In a 160-year-old sprawling farmhouse one would expect to encounter all manner of phantoms, but any apprehension I've felt in that moment before I turn on a light has been utterly unwarranted so far. The basement is damp and the attic has what looks like a noose over one of the rafters, but overall, the house has pretty good vibes. Or so I thought... 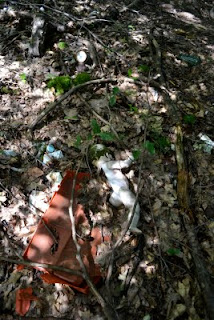 
Recently, I have taken to calling our house the Whore of the Helderbergs. Nearly everyone we talk to, from neighbors to tradesmen to guys at the hardware store, claim to have lived here at one time or another. At first we thought these were incredible coincidences, but now we've kind of come to expect people to say it. These various locals, perhaps sensing our nonchalance, have ramped up the intrigue with a bit of local lore. 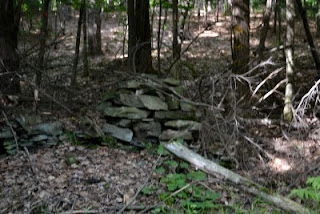 Rock Cairn in the Woods

One story was told to us by a local workman who came by to give us an estimate on excavation for the barn. His grandmother lived here in the '60's. According to her, he reports, there is a foundation of a house on the state land at the top of the hill behind our place. On this foundation once stood a little house, and in that house lived a family who, one cold long winter, froze to death right there inside their cabin. The whole family. He said he always got a creepy feeling in the woods back there after she told him that. Now I do too. 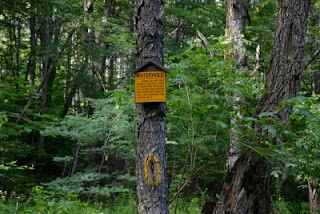 I think this is where the foundation is, but everything's too overgrown to see right now.

The other tale is from the wife of the trapper that FF called after he killed the fox. She reports that there is rumored to be a body buried beneath the giant flagstones that make up the basement floor. She even used the word "skullduggery" to describe the stories of what went on here before this corpse was placed in its final resting place. Skullduggery. Damn. 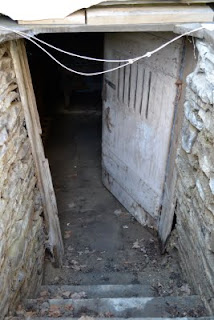 Note the flagstones - big enough to cram a body beneath 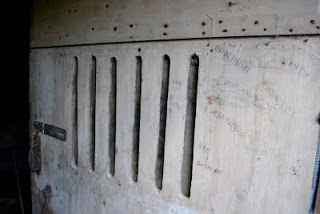 This Door is Certainly Creepy

Who knows if these stories are true; I think I'll have to hear it from the ghosts themselves before I believe it. In the meantime, I'll try to keep my wits about me when I'm walking the dog or visiting the cheese cave.
Posted by Cotton Hill Creamery at 5:05 PM