We gardeners appreciate the benefits of companion planting. Plant marigolds, nasturtiums, onions and other strong smellers around the garden to repel insects. Grow beans with corn to replenish nitrogen in the soil. And of course, as Louise Riotte's classic title states, carrots love tomatoes.

This year, I took companion planting to a new level. You see, we love eggplant. Last spring, when we started our seedlings, Farmer Fin's eyes lit up at the possibility of a summer filled with tubs of baba ganoush. A few months later, I watched helplessly as flea beetles made lace of the little leaves, killing the plants within a couple weeks. This has happened every time I have tried to grow eggplant. I hate those little bastards. You can't even squish them, because every time you close in on one, it jumps to another leaf. Grrr. I never seem to get it together to protect the seedlings with row covers, so I've tried spraying various concoctions of garlic and soap and hot pepper, year after year, to no avail. So this year, I decided to trick them instead. 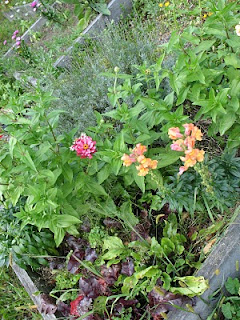 beets love flowers
In some ways, it worked great. I think the insects really were fooled. We have lots of gorgeous veggies this year, eggplants among them. We maximized our space, always at a premium with raised beds. Visitors to my garden remark on the vibrant snapdragons, and the cucumbers that surround them. 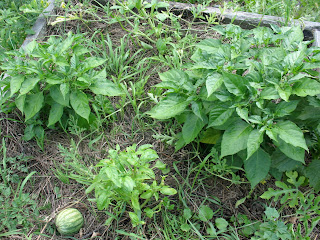 watermelon loves peppers love basil
There are a few negative aspects of extreme companion planting though. One is that if I'm cooking a big dinner, I can't easily send anyone else out to harvest things. It's much easier to send someone looking for a bed of basil plants than it is to direct them to one basil plant, in the first long bed in the back, between the nasturtium, the pepper, and the slicing cukes. More importantly, I kind of forgot that some plants need to cross-pollinate, which may explain why the lone eggplant in the kitchen garden isn't doing too much. 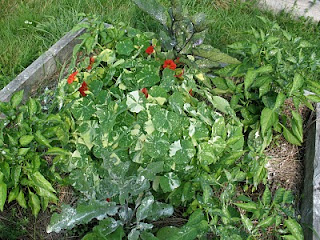 peppers love eggplants love basil loves nasturtiums
All in all though, I'm pretty pleased with it, and will definitely repeat the experiment, with some improvements, in next year's garden. 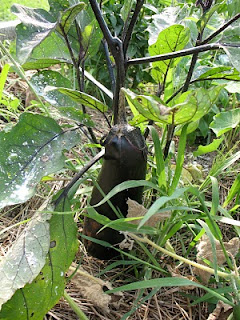